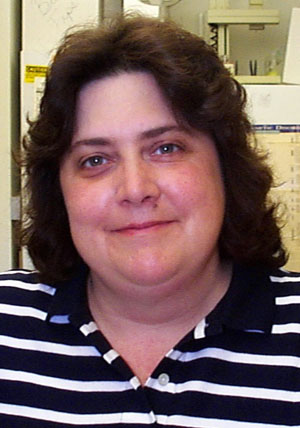 Debbie Nickerson died Christmas eve, less than a week after a recent diagnosis of aggressive metastatic abdominal cancer leading to multiorgan failure.  She died at home with her family.

Debbie was born in Mineola, NY on Long Island.  Her parents, William J and Josephine Nickerson, owned a garden center, where she often worked as a child.  She received her BA from Adelphi College and her PhD from the University of Tennessee.  After a post-doctoral fellowship at the University of Kentucky, she joined the faculty at the University of South Florida, where she taught multiple undergraduate courses.  Her interest in technology and immunology drew her to Dr. Leroy Hood’s lab at Cal Tech in the late 80’s, first as a Visiting Associate and then a Research Scientist.  She moved with Hood to the University of Washington in 1992 as an Assistant Professor of Molecular Biotechnology.  Later, when Molecular Biotechnology merged with Genetics, she became a founding member of the new Department of Genome Sciences.  Her interests in immunology led to an increasing focus on human variation and its connection to disease, a focus that continued for the rest of her career.  She was among the first to recognize the power of single nucleotide polymorphisms and devised increasingly efficient methods for their detection.  Genomic technology was her passion and she was both an early adopter as well as developer of new methods to discover genetic variation. With these methods, she characterized variation in multiple genes, with particular emphasis on apolipoprotein and genes involved in drug metabolism.  She uncovered variants associated with differential patient responses to warfarin and evaluated their utility in the clinic.  In addition to pharmacogenomics, she explored with her colleagues the implications of single nucleotide polymorphisms for population genetics and complex diseases including hypertension, cardiovascular disease, autism and numerous Mendelian disorders.

As sequencing costs dropped dramatically, she increasingly used genome sequencing to detect variations and elucidate associations with disease. She was a recognized leader both nationally and internationally. She led a major center for the National Institutes of Health (NIH) Trans-Omics for Precision Medicine program as it sought to understand the implications of genome sequence and other large-scale data sets for cardiovascular and pulmonary disease.  She led one of four centers to investigate the genomic basis of Mendelian diseases, determining the molecular basis of countless diseases that had mystified investigators for decades.  With the team that she developed and their expertise, her lab has become a principal contributor to the NIH’s All of Us Research Program which seeks to determine the genome sequences of more than 1,000,000 diverse individuals in the context of their life styles and health.  Her Center is leading the way in developing methods to return the DNA sequence findings to patients in a way that will improve their health care.  Her work, reflected in more than 417 original research publications, transformed our views of how human DNA sequence variation can affect humanity.

Over her career, she trained 15 graduate students and eight post-doctoral fellows.  She cared deeply about each of these budding scientists and worked actively to guide them on the best next steps for their careers.  At national meetings and conferences, she was always very vocal in support of young investigators and how best to engage them in large consortium programs. Beyond her own trainees, Debbie was a rich source of counsel and information for students and post-doctoral fellows across the Department of Genome Sciences.  She enjoyed getting to know all the new students each year through her graduate course on genome technologies, required of all first-year students. She took great pride and cared deeply about her research and her research team. Indeed, her cutting-edge research program was a major attraction for prospective graduate students across the country and around the world.

Her interests in variation and disease associations and her facility with large scale DNA sequencing and data collections drew her into multiple collaborations both in the Department, in the School of Medicine and across the country.  She also served on multiple advisory boards, including the American Society of Human Genetics, the National Center for Biotechnology Information, and the National Heart, Lung, and Blood Institute (NHLBI) as well as serving in numerous other roles for the NHLBI and the National Human Genome Research Institute (NHGRI).

Throughout her career, Debbie was a strong advocate for increasing the presence of women in science.  In the early days of the Human Genome Project and genomics, Debbie was all too often the only woman in a roomful of men.  She spoke up fearlessly when she felt women were underrepresented in meetings.  She fought to create an ethos that would not require women to sacrifice their personal lives in order to pursue careers in science, an ethos that was lacking when she came up through the ranks.  She selflessly supported the work of countless female trainees and faculty both locally and nationally.  She encouraged them not to let themselves be under-valued. She was also passionate about advancing the training of underrepresented minorities and felt that human genetics, especially, should be front-and-center in training a diverse group of next generation scientists.

Beyond her contributions to science Debbie enjoyed life, whether on trips to Las Vegas with her niece or in sharing the latest news or playing with her dogs and cats. Her New York upbringing shined through—she was not shy about sharing her opinions about restaurants or people. Debbie could be counted on for an honest opinion.  Her generosity to those who worked with her was unmatched.  She was fun to have as a friend. She was quick with a joke and her mischievous smile and laugh were special.  She will be deeply missed by her lab, colleagues, and the entire Department.  Debbie knew that she lived a great life; did everything she wanted to do; and was proud that she had touched so many people including students, colleagues, employees, and her family.

She is survived by her brother Bill Nickerson and his wife Beverley, her niece, Michele Pittoni, and Michele’s children, Charles and Charlotte.

In lieu of flowers the family suggests donations to the Endowed Research Fund for Genome Sciences of the University of Washington to support graduate student travel, particularly for graduate students with fewer resources.  Condolences may be sent to Bill Nickerson, 37 Merritt St., West Islip, NY 11795.

You are welcome to share a story about Debbie on her memory board.